SARTELL, Minn. — A Christmas card fail has netted a sweet outcome for a Minnesota family.

The Lathe family didn’t get around to sending a 2010 Christmas card. But the family’s hastily produced video card has morphed into a family tradition now enjoyed annually by thousands of people online.

“It started on a whim because we just ran out of time,” says Garrett Lathe, the father of the four Lathe teens.

Emma, the oldest of the children, was a first-grader the first time Garrett shot video of the diminutive quartet singing in unison.

Today, 17-year-old Emma is a high school junior. Spencer is 15, Kate is 14 and Sophie recently turned 13. These days they choose their own music and spend hours rehearsing elaborate four-part harmonies.

“I remember doing my first harmony in the car when I was in first grade,” Emma says.

Spencer remembers it too. “She showed us, and she was like, ‘Guys, guys, listen.’ And we were like, ‘Whoa – how did you figure that out?’”

In recent years, the siblings have favored arrangement by the a capella group Pentatonix.

Avi Kaplan, a former member of the popular group, commented on one of the family’s videos, resulting in joyful shrieks from the Lathe children.

The family agrees on its one bust: the year Garrett decided his kids should do a lip sync to “You’re a Mean One, Mr. Grinch.”

“Oh yeah, that was the game-changer,” says Holly Lathe, the children’s mother.

“The next year we decided to do it on our own,” Emma reports.

Garrett now knows he blew it. “That was the line, ‘Dad, we've got this,’” he laughs. 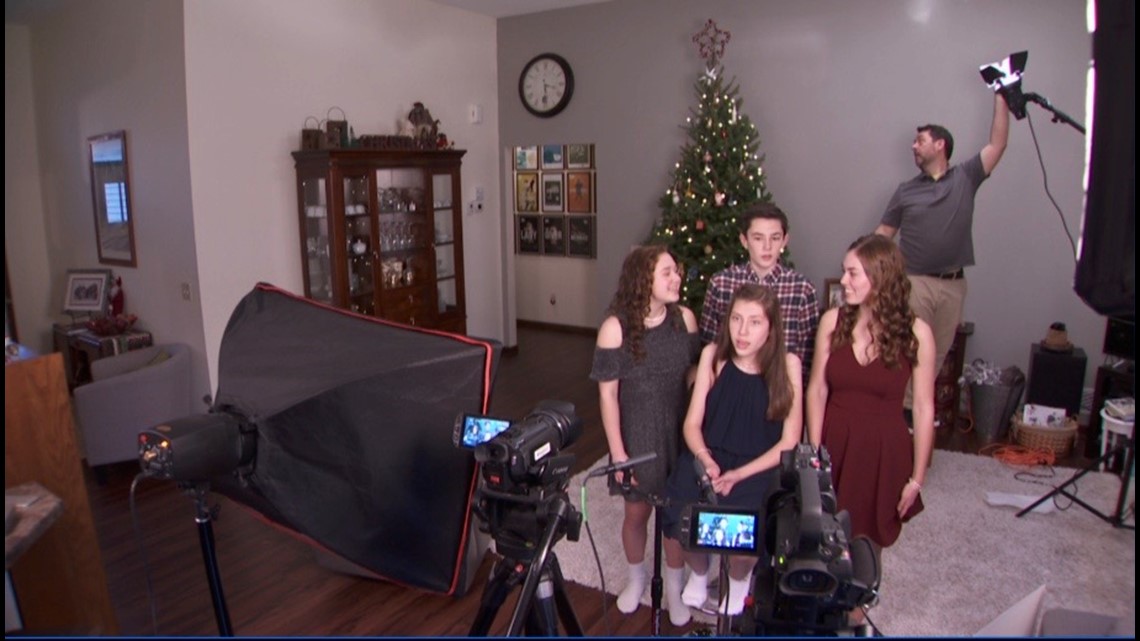 The family’s 2019 video features another Pentatonix arrangement of “I’ll be Home for Christmas.”

An hour before the recording, the girls help each other with their hair and dress in their Christmas best - while Garrett and Holly move the table and chairs from the dining room and carry in lights and camera gear.

“It’s absolutely overkill,” Garrett laughs. “I don’t buy nice cars, I don’t go to a lot of football games - I buy video equipment I use once a year.”

No one can blame Holly and Garrett for being enthusiastic supporters. Both are school music teachers, Garrett in Sauk Rapids and Holly in Sartell.

Emma will start college in a couple of years, but already talks of returning to keep the tradition going.

“I don't think it would be Christmas if we didn't do our Christmas video,” she says.

Watch all 10 Christmas card videos below or click here: